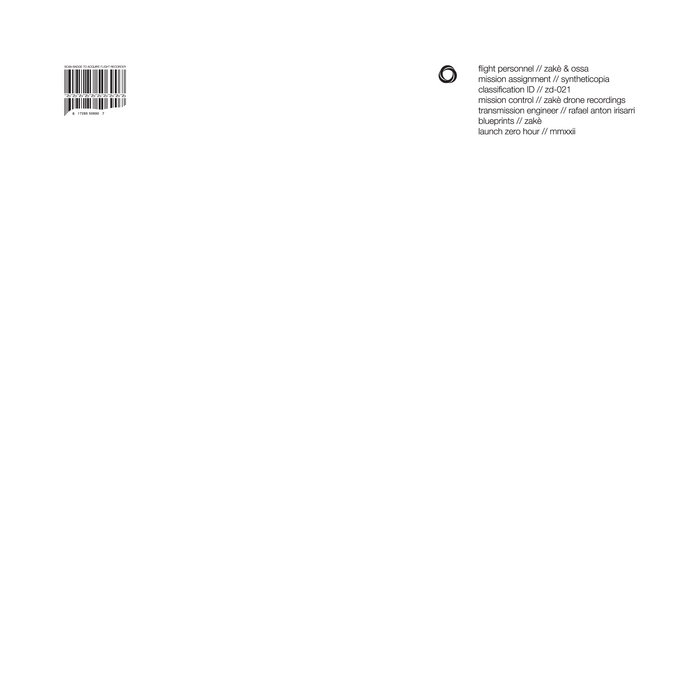 Steve Mahoney Most know I am a Zake Drones fan. This album release is another excellent reason why. You really do feel you are in Space with this. Track 6 Drifting. Stunning. Well actually it all is. It's not easy picking a favourite track. Warp 10 out of 10 rating from me. Whatever Space Quadrant your flying to play this. A quintessential Zake Ossa album to own. Zake is a defining artist in this genre. Coming on vinyl record soon. I cannot wait. More from Ossa & Zake please. This is a great team. Favorite track: drifting.

Tyler Stoker Syntheticopia has quickly become one of my favorite auditory journeys. It portrays an experience that is both vivid and expansive. Highly recommended by this traveler. Favorite track: metric expansion.
more...

adam in the parking lot

Welcome to Astronomer, Inc. (AI) is a non-government agency that is responsible for auditory research of deep space phonic transmissions and sound exploration.

AI’s research is a mix of disciplines which encompasses earth-based instrumentation and sound devices, while capturing celestial phonic emissions.

AI approved a new mission and the program was titled, ‘syntheticopia’. Classification ID for this voyage was ZD-021. The goal of this mission was to collect and study sound origins of the cosmos.

The flight personnel for this mission were zakè and Ossa. Transmission Engineer was Rafael Anton Irisarri.

zakè and Ossa documented their earth-based sounds prior to departure. Through AI’s space link transponder, collected sounds from the deepest parts of space were sent back to accompany their previously documented work. The flight personnel never returned to their earthly home.

We hope you enjoy the sounds of syntheticopia.

“Soaring to the depths of our universe, gallant spacecrafts roam the cosmos, capturing the sounds of celestial wonders.“


"Maybe it’s just me and my own overactive imagination, but when I’m deep in it with some heady ambient and new age music I often imagine floating in space. The deep and healing tones of heavily-effected guitar, the warm buzz of analog synths, the wash of digital pads like static rain, and just the overwhelming sense of a quieted mind put me squarely floating in the cosmos. There’s something about the heady calm and meditative high of ambient/new age music that brings to mind constellations, galaxy clusters, and that final frontier.

Ambient/new age musicians/producers zakè and Ossa have taken that idea to a whole new level with the transcendent Syntheticopia. Syntheticopia is an LP built from actual sounds of space, along with an impressive list of earthbound hardware like the Korg Minilogue, Moog Mother-32, Poly D Polyphonic Synth, and more. The sounds of space come straight from NASA field recordings courtesy of spacecrafts like Juno, Van Allen Probes, Cassini, Galileo, and Stardust. The results are nothing short of, well, out of this world.

You don’t “hear” space on Syntheticopia. The NASA field recordings act as a foundation on which zakè and Ossa launch their heady and prolific compositions from. These two composers/producers seem to use the static tones and cryptic swishes of space noise as a base ingredient to these epic cosmic compositions. It’s kind of a dream come true for any ambient musician.

It seems to me that the ultimate goal of any new age/ambient musician is to take the listener from their everyday rut and give them a transformative musical experience. Something that transcends this earthly plane; headphones on and floating in some middle space between here and beyond, purple hues and chrome clouds. Or riding the slipstream in the Milky Way, with only your headphones keeping you from disappearing completely.

Syntheticopia is a headphones album. Tracks like “astronomer, inc”, “syntheticopia”, and “drifting” are best up close and personal. They pull you into their sonic cosmos and carry you along as they slowly encompass your psyche. zakè is no stranger to this world, being an old hand in the world of ambient/new age music. He and Ossa use the sounds of space as just another color palate to paint with, filling richly dark tones with touches of light.

Each track – from “galaxy twilight” to “unchartered region” to “acquisition of signal” -form a constellation of buzzing, heady sounds and moods. They encapsulate the monolithic nature of these songs. There’s a connectivity here; an emotional core that gives a beating heart to the cold, vastness of space. Maybe it’s the awe that humanity holds for the infinite blackness of the cosmos, and the mystery of that final frontier that comes through in these songs. Through all the cosmic field recordings and buzzing analog electronics, the humanity shows through.

Syntheticopia is music wonder for the head and heart. A soundtrack for pondering, dreaming, and looking up at the stars."


"If synth-based music was so easy to make, then why don’t we have so much fantastic synth-based music? Just take a synth, create a sound, then press a chord with an arpeggio turned on, record a passage on a loop and tweak some knobs while you are at it. This is a lot of what I see on videos showcasing a modular gig, and frankly, it still sounds just like bleeps and boops. I know exactly why that is, and this I’ll leave out for another time and moment (TLDR; sound design != music). But let’s instead turn towards Zach Frizzell, the founder of Past Inside the Present label, and his collaboration with Kaiton Slusher, together known as zakè & ossa.

The duo releases an 11-track album, which they titled syntheticopia, on a beautifully crafted 160g “purple nebula” vinyl with a very minimalist layout and cover design, as you already see featured on these pages. But beyond this classic presentation and the array of semi-modular analogue synths, such as Moog DFAM & Mother-32, Korg Minilogue XD and Poly D, along with Tascam field recorders and the final mastering touch by Rafael Anton Irisarri, lies something truly stunning to enjoy.

Welcome to Astronomer, Inc. You are about to set off on a journey. And this interstellar voyage shall be accompanied by their soundtrack of highly textured, layered atmospheres, spacial dimensions, and ethereal drift. It’s impossible not to compare some delicate pads which are slightly detuned, lo-fi and wobbly with the output from Boards of Canada (check out “space and time” in particular). Sprinkle in some samples from the National Aeronautics and Space Administration (NASA) and the resemblance evolves into a necessity. And this, of course, I mean in a very positive light. The conceptual storyline portrays a mission of studying the sound origins of the cosmos and although it seems that the flight personnel never returned to their earthly home, I’m really hoping they’ll send more transmissions from wherever they are, out there, in the universe. Highly recommended."